Thinking of You card for my husband's Aunt 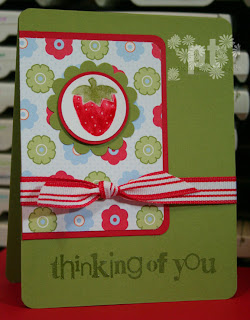 In February we got some bad news ~ two days in a row. Two of my husband's Uncles had died. One had been battling cancer for quite a while and the other died of a heart attack. The Aunt that is married to the one that died of the heart attack is having such a hard time, they were driving home from the Sault (hope I spelled that right ~ it's in the U.P. of Michigan) maybe spelled Souix.. anyways.. they were driving home and he wasn't talking much and S. asked him if he was okay and he said that he wasn't feeling well and they went straight to the hospital. The doctor's told her to go on home to get a change of clothes, they were going to send him to another hospital, a bigger one ~ she wasn't home no time at all and someone came to tell her that he had died of a massive heart attack. Everytime I speak to my husband's grandma, she always says what a hard time S. is having ~ so I thought I would send her a card to let her know that I was thinking about her. I am going to call her tomorrow too. I can't imagine if something happened to my husband so I don't know how she is feeling, but it's something that must hurt to the core.

Thanks for looking and reading ~ Pam

Pretty card. I am so sorry to hear of the sadness in your family right now. It must be especially hard for your aunt since she wasn't with her hubby when he died. She will love your card and a phone call. It really does help to know that others are thinking of you and care.

It is a lovely card. I'm sure your aunt will appreciate it.