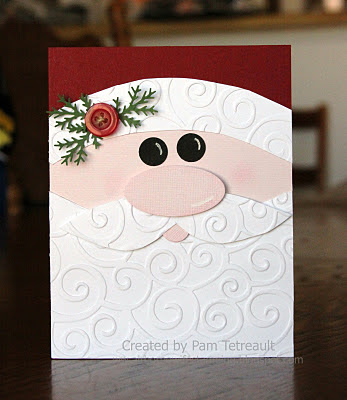 It's really not that hard.. and below photos is "how to" make this cutie. 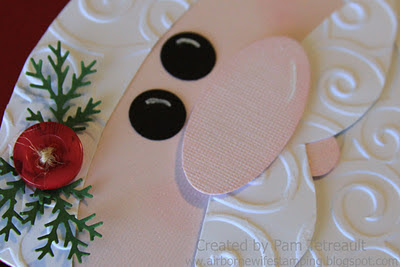 I have Blush Blossom Stampin' UP! card stock, but they aren't the "textured" that was used in the original so I headed to HL to get some. The great thing was that the papers were on sale 40% off so I was happy to be able to get some rather cheaply. 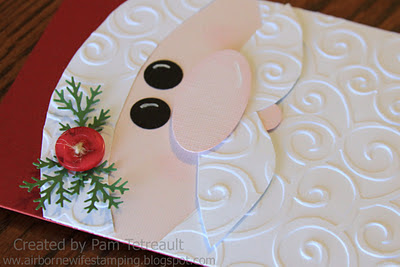 For the white piece of card stock used for Santa's beard.. since I wanted it to fill the card from one side to the other.. I took a piece of card stock that was 5 1/2" x 8 1/2" and I embossed both ends of it.. then cut it in half up to the edges .. then I cut it down to size at 4 1/4".. do it a tad bigger than you can cut any excess off after you attach it. Then I flipped it over and measured up 3" from the bottom and put a mark on each side, then measured up 1" and put two more marks.. you can take a bowl/plate.. something curved.. I used my Color Wheel from Stampin' UP! and I lined it up with the notches on each side and lightly drew the curved line, moved it up to the next set of notches and did the same.. then I cut it out.. .. now here is where I can't remember if I cut the mustache from that same piece or if I drew/cut a curved line on the other piece.. I say this because I used the shorter piece the first time and didn't like that my white piece went from one side of the card to the other so I think I might've used the mustache from that piece and redrew/cut my other pieces from the other piece.. sorry for any confusion.

To do the mustache.. on the curved piece that you will have after cutting the last 1" piece.. I measured to the center and then lightly drew a line up the middle.. then coming in a little bit on each side I drew a curved line from to the center on each side.. leaving about a 1/2" part in the middle.

For the textured flesh color paper, I cut a piece about 3" and after laying the white piece on the card, I slid it under it and then put the upper curved piece for his hat on top of that to make sure it was covered.. slide it down some more if you need to.

I removed the two white pieces, marked a line at the top and bottom on the card base so I knew where to adhere it. I adhered the flesh piece down, then put the beard part on and then the hat. For the eyes, tongue and nose.

I punched out two black circles for the eyes, one for the mouth and then one oval for the nose. Draw white lines on your black circles for the eyes and after sponging chalk on the tongue and around the nose piece you can draw white lines on the nose as well. My gel pen wasn't working too great last night and after pulling out four more, I gave up and left it as it was.

For the tongue I put a dab of Tombow Mono Multi glue on the upper part of the tongue and laid the mustache on it to glue together.. I sat it aside to dry.

I glued the eyes on the face and put some pink chalk on it for his cheeks. I then punched out some branch pieces (3) and then took a red button and criss crossed some twine in it and put about four glue dots on the back of it.. I used glue dots to put the branch pieces down and put the button on top of them and that was it.. all done!


Supplies used on this card are:

ink: white gel pen, light pink chalk.. I used some pearly stuff on mine around the edges of the nose, the tongue and for his cheeks

accessories: CB swirls embossing folder, MS branch punch (you could use a holly punch if you have one), a MM button, some twine, a 1/2" circle punch and an oval punch (I used the medium Stampin' UP! oval punch).. and of course not card is complete without some Dimensionals!!

Oh my gosh this is just ADORABLE Pam! Ethan is going to love it. Merry Christmas!

Pam, Ethan will love this!! It is sooo cute! Merry Christmas!

What a cute card! Don't let Sandy see it. She was looking for Santa cards like this a while back. Really, though, I see a S&S tutorial! I'll be trying this out come next July. Thanks for sharing your awesome card.

OMG this is such a adorable Card. I will have to save this for next Year. Thanks for sharing it.. Amazing and beautiful!

This is just the cutest Santa ever!

Thanks for the tutorial on this darling card, Pam! Great job.

This is so cute!! I'm going to give it a try for next year's cards.