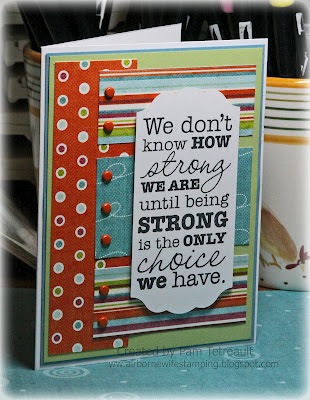 Hello everybody... I have been working on my stamp room all day.. and yesterday. Thanks to my mom who helped me unpack a ton of boxes the last night she was here. We unpacked all the stamps, inks, reams of paper, all the embossing stuff.. and so much more.

I got some new stamp stuff while we were on leave in TN at a really awesome stamp store in Dover called Precious Scraps. The lady who owns/runs it is such a sweetheart.

I have been itching to make something and really needed to clear some room to make some thank you cards and a birthday card for a little boy who is turning 1 year old in a few weeks.

I used this weeks OWH Sketch Challenge for this card: 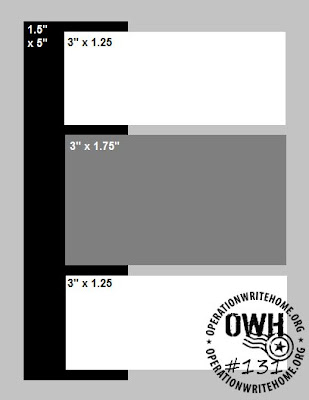 Some pictures of the "hot mess" of a stamp room I've been messing with.. a word I have said more times in the last few days then in my entire life... RIDICULOUS!!!
I am shocked at how much stuff I have.. and there are so many boxes yet to be opened, ones opened with no where to put.. the kitchen at the time these were taken had a bunch of boxes sitting in it and some in the living room waiting to be taken upstairs. oh goodness.. I need to get busy making thousands upon thousands of cards so I can use up some of this stuff.

I already had the shelf on the left that I had bought from someone off of Craigslist while we were in El Paso for $75. I got the one of the right from someone here out in Eastover for $75 as well. that thing was sooooo hard to get in the house, but we all worked together and got it in. The shelves are from Ikea and are called Expedit shelves. 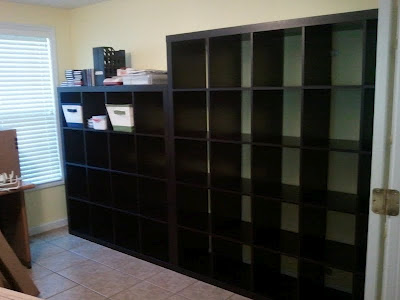 This was earlier today. I had cleared out all the boxes that were stacked up all along the left wall, and brought in a folding table that was in the garage, then set that cubby shelf on it so that I can put all my embossing folders, dies, spellbinders, etc. on it.

This was taken while I was in the middle of unpacking three boxes full of punches. They are hanging in shoe holders that are hanging on the doors.. the doors open into the room and are off to the left and right. 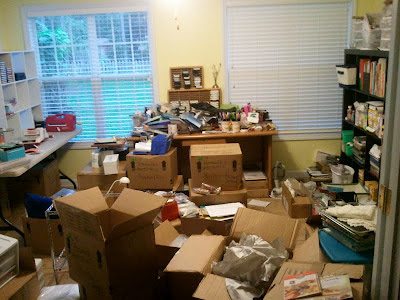 This was the top of the desk earlier today... I was ready to pull my hair out.. but took my time and got things put away and where they needed to go. 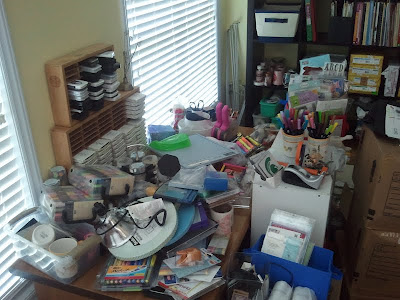 My desktop all straightened up.. the lamp is one of two new OttLites that I got at an awesome price at Tuesday Morning during one of their additional 50% off clearance sales.. they are all over the web right now for $80-90+.. I got each for $22.49. I need to put the other together and set it up to the left. 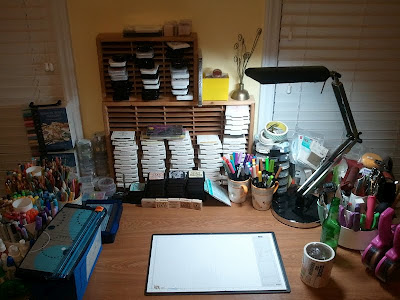 Hope everyone is having a great summer... it's been so hot here in N.C... but I think that all the rains that we have had has drove down the temps and all this week they said it would be in the low 90's.. I'd like 70's better.. but I'll take what I can because I was ever so sick of the 100 temp days.

have a great airborne day!
God Bless All Our Military.. each and every one of them

Beautiful card and loving the dp with the bold colors. Thanks for your visit and leaving the luv. Also making me LOL. Hugs

Thanks for sharing Pam! What a ton of work moving all the time, work for regular moving, and then your stamp room??? I can't imagine moving that on a regular basis! Kudos to you for keeping up your OWH!! I'm a USAF who doesn't move to much thankfully!!
Ginny

So glad you're back...missed ya! Great card as always! Thank god for Tiesday Morning! TFS!!!

Wow, Pam! I'm not sure I could move all my scrapbooking/cardmaking stuff as much as you do! In the last 12 years I've only moved once and that was enough for me...LOL. We'll miss you in TEXAS. Have fun settling into your new place. Glad to see you blogging again...you make AWESOME cards!

Great card!
I love those shelves! I am thinking I want to do a whole wall of similar shelves once we start doing my scrap room (IF we ever remodel so I have my scrap room!)
I need to go through all my scrapbooking stuff and purge. I am sure this will be how it looks during the process and just the thought bothers me. Maybe that's why I haven't started yet!

Hi Pam! I've been missing your posts..I'd love to see more of your craft room, it looks awesome, and I'm liking the view out your window too.

Hey Pam! Great to see your post and know you're getting settled in NC! A big job, but your craft room is looking super! Love your idea of putting punches in shoe holders. Stop by my blog when you have a sec; want to show you a photo from my son's wedding last Sat.! Glad you're "back"!!

Hi Pam! Missed you. Glad to see you back. I love your use of brads on the card.

You're back!! Beautiful card! Good luck with all the unpacking and organizing. I know you'll be happy to get settled again.

Your craft room looks awesome - those shelves are just perfect. It's so good to see you settling into your new home.